Do Jellyfish Have Eyes 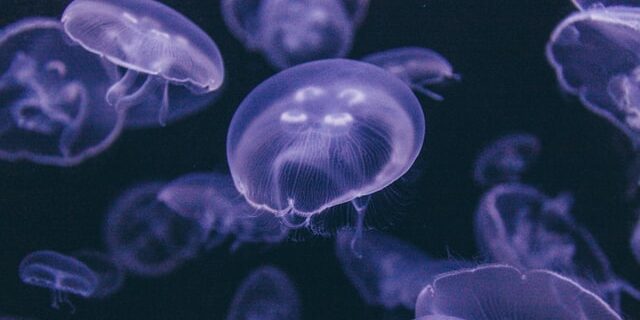 Jellyfish, which are not actually fish, look like transparent blobs with tentacles floating in the ocean. They get their name based on the fact that they are made of 2 cellular layers with a jelly like substance in the middle called mesoglea. These creatures are very simple, and they are made up of 95% percent water. But, do they have a brain and eyes?

Jellyfish, also known as sea jellies, are part of the cnidaria phylum. These are found all throughout the oceans of the world, and they can be found in shallow water as well as the deep sea. They are basically a bell shaped body that has tentacles that hang down.

The bell, which is the main part of the sea jelly, is filled with a jelly like substance called mesoglea. The mesoglea is between the epidermis and the gastrodermis. Around the bell are simple sensory organs called rhopalia. These organs sense light, perceive gravity, and they help with the pace of swimming. When they “swim” it is basically a contraction of their bell which causes a slight propulsion. This is not done inn all species though.

This system helps the jellyfish understand what direction it is facing so it knows which way is up. It also can use this to detect light.

Next, we need to understand how these rhopalia are used.

How Jellyfish See In The Ocean

There are many different species of jellyfish, and they are all a little different. It is important to understand how these beautiful creatures work because if we understand them better it helps both of us. Some jellyfish are not harmful, some can cause mild stings, and there are some that are very deadly to humans.

Knowing that some of them can kill, it helps us to understand how they move, swim, and see. Do they see people in the water and swim toward them to sting them? No, they don’t use their eyes to seek out people to sting them.

Most species of jellies do not actually swim. Instead, they float along the oceans currents. This is why so many of them wash up on shore. They don’t actively swim around like a fish or a sea turtle. Because of this, they have no use for eyes. They don’t need to see to hunt down prey.

When it comes to hunting and catching prey, they don’t need to see to hunt. Jellyfish use their long tentacles to catch prey which can range from small fish to plankton. They will float along the current, and food will just swim into their tentacles which are used to paralyze and kill their prey. Then, they use certain ones to bring the food into their mouth hole. All of that can be accomplished while just floating along in the current.

While jellyfish do have some natural predators like sea turtles, even if they had eyes to see them, they wouldn’t be able to swim away from them. For most of them, having eyes would not serve much of a purpose. They don’t need eyes to see predators or prey, and they don’t really need them to see where they are going.

Most of them don’t see because they don’t need to, but some species do use eyes to see. The box jellyfish is one species that behaves much differently, and they use their eyes for a variety of tasks. The box jelly is different from most because it actually swims, and it has a lot of eyes.

How Do Jellyfish Eyes Work?

If you think about eyes, the retina will take an image and transform it into electrical impulses which are carried to the brain and processed. When it comes to jellies, they don’t take images and send them to the brain to be processed. The main reason they don’t do this is because they don’t have a brain!

Let’s take a look at how box jellies use their eyes. The box jelly has the most advanced eyes of any species. They have 4 different types of eyes, and in total they have 24 eyes. These eyes help to orient the jelly, they help them hunt prey, and they help them when they are swimming. If you remember earlier, I talked about how these creatures don’t swim, but the box jellyfish is unique.

The fact that these creatures can see and use sight for guidance when swimming is very surprising since they don’t have an advanced central nervous system to process this information. One of the bioligist that has researched this is Anders Garm from the University of Copenhagen.

All of their eyes, 24 in total, are connected to their rhopalial nervous sytem. And each of the 4 distinct types seems to all be connected to each other via a subsystem. It is unknown what information the eyes register and how it is processed. Two of these eyes have the capability to form images.

So, there are four identical sensory structures with each carrying six eyes of 4 morphological types. These are the upper and lower eyes, the pit eyes, and the slit eyes. The upper eye is always pointed up even when the box moves and rotates in different directions. Biologist’s best guess is that this is used to recognize terrestrial environments like the mangrove canopy to help with direction.

Box jellies can swim fairly fast, and they will actually swim towards the coastline to go hunt for fish in the mangrove canopies. They use their eyes to move through mangrove canopies. This seems pretty smart for creatures that are just blobs that float in the ocean. To recap, four of the eyes, or the upper eyes, are always pointed up no matter what the orientation is of the box jelly.

It has also been recently discovered that box jellyfish rest at night. They may do this because their eyes are not capable of seeing in darkness to hunt or move.

They also have a complex mating ritual which needs to be precise, and biologists also believe the reason they have eyes is to help with this process. But that begs the question, if eyes are needed for precise mating and eyes evolved over time, then how did they mate prior to not having eyes? Certainly, the eyes and this complex mating didn’t evolve at the exact same time did it?