Most Dangerous And Deadliest Jellyfish 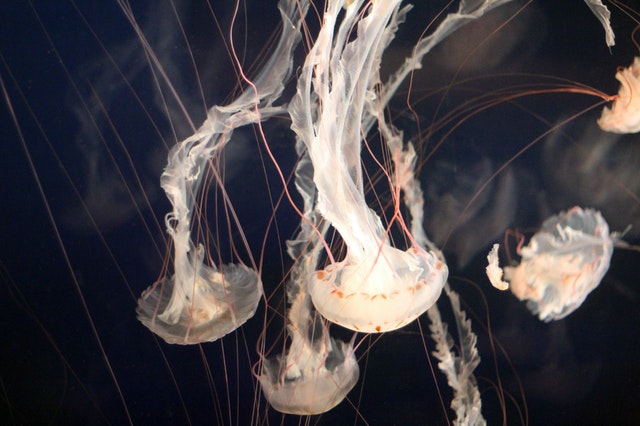 Jellyfish are one of the most simple animals on the planet. They are 95% water, have no brain or heart, yet they can be extremely dangerous and even deadly in some situations. There are thousands of species, and while many of them only cause minor problems, some are very venomous. While jellyfish eat fish, plankton, and crustaceans, they certainly don’t eat people, but if you come into contact with the wrong species, they can certainly kill you.

The deadliest jellyfish in the world is the box jellyfish specifically the Chironex fleckeri. Its toxins are so painful that survivors have wished they were dead so that they would not have to endure the pain anymore. This box jellyfish has even taken the lives of many people.

Here is a list of the most dangerous jellyfish known to man.

Box Jellyfish (Chironex fleckeri) venom is considered to be one of the most deadly types of venom in the world. It gets its name from the box shape that is has which is unique among jellyfish. Most species of jellies are saucer shaped, but the box is square shaped. The adult can be up to 10 feet long, and it can weigh over 4 pounds. It can have up to 40 tentacles that stream down from its bell shaped body. Each tentacle has around 5,000 stinging cells. That means that it has around 200,000 different spots where it can inject its venom into its prey.

A 6 feet section of one tentacle has enough venom to kill a human being, and it is 500 times more toxic than a Portuguese man o’war. Its toxins attack the nervous system, the heart, and skin. When a box jelly stings a human, it can inflect intense pain that can also permanently scar skin. A fatal sting can kill you within just 2 minutes. The box jellyfish has killed more than 60 people off the shore of Australia which is more lthan sharks or crocodiles.

Survivors have described the pain as so intense that they felt like they would rather die than continue to endure the pain. They have mentioned that it was so painful to breathe, and to keep from experiencing so much pain, they would slow down their breathing just to tolerate the pain better. A quick touch on a small area of a tentacle will cause severe burning pain. Some swimmers have died from shock before even being able to swim back to shore. The sting can be so traumatic that some survivors will not even go back into the ocean again for fear of being stung again.

Beaches in Australia have to section off certain areas with stinger nets so that swimmers can safely swim in the ocean. Outside of the net, you must wear protective gear, because you could be killed by a sting.

Irukandji are a type of box jellyfish but certainly different than the fleckeri. These are very small with an adult size of only 1 cubic centimeter. Don’t be fooled by their tiny size though, as they are one of the most venomous jellyfish in the world. Their venom is 100 times more potent than a cobras and 1000’s of times more potent than a tarantula. Even with high doses of morphine, the pain is still intense. The Irukandji jellyfish inhabit the water around Australia, and they are given their name from the local Aboriginal people.

Because of their small size, venom is only injected in a very small spot unlike a box jellyfish that has a 6 foot long tentacle. This is what makes them so dangerous. Most people are not even aware that they were stung because it only feels like a mosquito bite at first. After 30 minutes, the symptoms become more pronounced, and it even has a name called Irukandji syndrome. The symptoms of the venomous sting can include nausea, vomiting, muscle aches, hypertension, and tachycardia.

The symptoms can improve within several hours, but it can take up to a day as well. There have been some instances where the symptoms persist for up to two weeks. While they are very dangerous, if treated properly people do not generally die from their sting. Having said that, the Irukandji jellyfish has killed humans before.

There are several species including Carukia barnesi and Malo kingi. The Malo kingi is also referred to as the common kingslayer because it killed a tourist with the last name of King. In 2002, a United States tourist was snorkeling around Australia, and he was stung which ended his life.

Chiropsalmus quadrumanus, also known as the four handed box jellyfish is a deadly species. This venomous creature can inflict severe agonizing pain, and it has taken human life, so it is a deadly species. In addition to the pain their venom causes, it also causes respiratory distress and cardiac dysfunction.

This dangerous creature is found all down the eastern coast of the United States, and it has taken the life of a young child in the Gulf of Mexico. The child died within an hour of being stung. While it has killed people before, it is nowhere near as deadly as the Chironex fleckeri.

The Alatina or commonly called Sea Wasp is a species of box jellyfish, and they can be found across multiple oceans including the Pacific, Indian, and Atlantic. These are not usually deadly, but they are quite dangerous. Their sting can inflict quite a lot of severe pain. These are found in the Indian, Pacific, and Atlantic Oceans.

The Mauve Stinger is also known as the purple-striped jellyfish, and there is one feature that sets this apart from most jellyfish. It has stingers on its bell in addition to its tentacles. While most can be picked up by their bell, this species cannot because it will sting you.

The Mauve Stinger is very dangerous because they are so common and they can disrupt so many things due to their difficulty in removing them due to the stingers on their bell. They can wash up on shores in large amounts which keeps tourists off the beaches. Recently dead ones can still inject their venom, so it is not safe to handle them even when they are dead. In addition to that, they are very difficult to remove from fishing nets.

Their sting can cause pain that last over a week, and it may include vomiting and dizziness. While not fatal, it is a very common species that is dangerous.

How Does Jellyfish Venom Kill

Jellyfish have tentacles that contain nematocysts. Each tentacle contains billions of nematocysts, and inside each one there is a coiled tube that is soaked in venom. When triggered, each nematocyst explodes into the victim. The speed at which this happens is thousands of times the force of gravity. Vemon is injected all along the tenactle where it makes contact with its prey. From there, venom flows to the heart and nervous system.

Depending on the species and the area of surface that is injected will determine the effects of the poison.

Jellyfish venom contains a protein called porin which will tear holes in all types of different cells including skin, blood, and nerve cells. This collection of proteins are different by species which is why some jellyfish produces an sting that is annoying and others can produce one that is deadly.