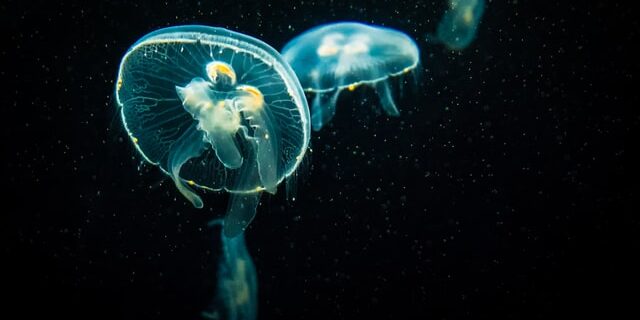 We take a look at some popular questions that always come up when jellyfish are being discussed. This is common for creatures of the sea because most people do not understand animals that they rarely encounter. For most people, jellyfish are only found washed up on the shore of popular beaches, or they are seen in large public aquariums. It is important for us to understand as much information as possible, and we need to learn all the facts.

You may also like: What Is The Largest Jellyfish

Here are 10 jellyfish facts as well as some questions answered about jellyfish.

Jellyfish are in fact not fish but they are gelatinous zooplankton. Fish are defined as an aquatic animal with a skull and sometimes a backbone whose limbs are in the shape of fins. Jellyfish belong to the phylum Cnidaria which means they cannot be classified as a fish even though it is in their name.

Some marine biologist refer to them as sea jellies because they are not fish.

Fish are a little different because they are not part of a single clade like a bird. When you see a bird, you know it is a bird. The term “fish” can include creatures like sharks and rays. The term fish has been widely used to describe aquatic animals that are indeed not fish either. Some common examples of this besides jellyfish are starfish and crayfish. Neither one of these animals are technically fish either, but it is in their name.

Hopefully this answers the question: are jellyfish fish.

No, jellyfish don’t feel pain because they lack pain receptors, a brain, and a central nervous system. They have a simple nervous system so they do not have a method of transmitting pain signals.

Normally, specialized sensory receptors transform painful stimuli into electrical signals which then travel to the central nervous system via neurotransmitters. An example of a neurotransmitter is substance P. These pain signals travel to the brain, which let you know that you are experiencing pain. This is obviously a simple explanation, and pain transmission is far more complex than that.

Yes, jellyfish do poop, but they do not poop like humans do. Jellyfish have one orifice which serves as their mouth and anus. This opening is where food enters and exits, so they do not have a separate mouth and butt. This is how jellyfish go to the bathroom.

Most animals have two holes for digestion. They have a mouth which consumes food, and an anus, where poop comes out. Evolutionary biologist are still amazed at how jellyfish do not have this normal two hole system. Having two holes allows animals and people to eat and digest food at the same time. Jellyfish which have one hole, can only do one thing at a time.

Comb jellies are unique because they have been seen spitting food out of their mouth (which biologists assumed was poop) and they have been seen excreting poop from tiny holes in its body. Scientists were able to determine this because this species of jellyfish is translucent, and they were able to inject colored dye into the jellyfish food. This would allow them to see food pass through its body and out of the tiny holes.

A close up shot of the holes on the rear end showed a ring of muscles around the holes. The scientist said that it was sphincter like holes.

Jellies have to either use their hole to consume food or to excrete it.

Do Jellyfish Have Teeth

Some jellyfish like the beroid comb jellyfish have teeth. Granted, these are not teeth with enamel like people have, but they are tiny hairs around their mouth that is used to shred food so that it can enter in their disgestive area.

Here is a video of a beroid jellyfish eating another of its kind. They then will use their teeth to tear apart their prey for digestion once the food cannot escape.

Do Jellyfish Have Blood

Jellyfish do not have blood or a circulatory system that moves blood around their body. They also lack a heart which normally serves the purpose of pumping blood throughout an animals whole body.

Jellyfish are simple sea creatures that lack these items because they do not need them. Jellies are composed of several layers including the epidermis, the mesoglea, and the gastrodermis. None of these layers contain blood vessels or blood.

Do Jellyfish Have Genders

During sexual reproduction, a male medusa will release sperm trails that are taken up orally by the female moon jellyfish, and they will fertilize their eggs internally.

Male jellyfish will have gonads in the gut, and these can be brighly colored. This is how you can tell if a jellyfish is a male.

Female jellyfish will have eggs inside of them. Once they consume sperm, their eggs will be fertilized. Sometimes you can identify if a jellyfish is a female by eggs in her mouth, or sometimes she will hold eggs pouches under her oral arms.

This is how you can determine the gender of a jellyfish.