What Do Jellyfish Eat 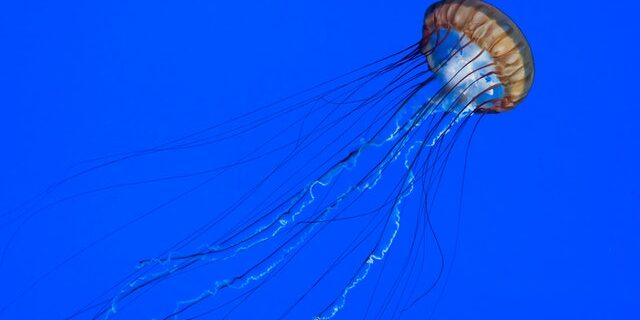 Jellyfish are invertebrates that live in every ocean in the world, and they get their name from their appearance. They do not have any bones, and they are made of a jelly like substance. In addition to that, they also do not have a heart or brains. Even though they have the name “fish” in jellyfish, they are actually not fish at all. They belong to the phylum Cnidaria and are considered invertebrates. They come in all different sizes ranging from microscopic to larger than grown men. Most of them are mobile, but there are some that anchor to the seabed. They have a truly unique structure and digestive system, so they do not eat and digest food like we do.

What Does A Jellyfish Eat?

Jellyfish are carnivorous animals so they eat meat like other sea creatures. These opportunistic predators will eat plankton, dinoflagellates, zooplankton (tiny sea creatures), small fish, and fish eggs. Sometimes, they will even eat other jellyfish. They don’t actively hunt their food because they wait for food to present itself to them.

In the wild, sea jellies are not predators. When you think of predators in the ocean, sharks are often the first thing that comes to mind. They will seek out their prey, hunt it down to kill it, and they will eat it. On the other hand, jellies have very limited control of their movement, but they can move with pulsations from the bell shaped body. Because of this, they are poor swimmers, so they will not seek out prey to eat and hunt it down. Some, like the box jellyfish, use mobility more than others, but overall, they usually float with the current. This is why they are labelled as opportunistic. They eat when food presents itself and they can take advantage of that.

If you look at their design, they are usually clear with long tentacles. This allows them to be somewhat camouflaged in the ocean in the hopes that food will accidentally swim into them. It also helps keep them hidden from things that are trying to eat them. These long tentacles that hang down are used to capture prey. Each tentacle has millions of nematocysts on them which is what pierces flesh and injects venom into its victim.

Size is one factor that determines what they eat. They range in size from bigger than humans to the size of a person’s fingernail. Obviously, something that is a few mm in length is not going to eat fish, but instead, they will consume smaller things. Some of their food choices are dinoflagellates which are mostly marine plankton, and they are usually considered to be algae. Another part of their diet is Zooplankton which are heterotrophic plankton. A good way to describe them is calling them tiny sea creatures. They can be microscopic or even a millimeter or two. There are many zooplankton groups including crustaceans like copepods, krill, arrow worms, and even jellyfish. These are also a staple of the smaller species. The larger species of jellyfish will consume them as well, but they will also eat larger prey like fish.

This is where their long tentacles come into play. A fish will swim into a tentacle, and it will be injected with venom. There are different types of venom depending on the species, but as an example, the venom will cut of the respiratory system of a fish. This kills the prey and allows the jellyfish to bring it to its small mouth which feeds into its digestive cavity.

For jellyfish that are kept in aquariums, they usually will eat brine shrimp. These can be purchased online or at your local fish store. Some people even set up home diy brine shrimp hatcheries.

How Do Jellyfish Eat

Each tentacle is covered with thousands of cells called cnidoblasts. Inside of each cnidoblast are nematocysts which uncoil due to pressure of something bumping against them. Each nematocyst will inject a neurotoxin or venom into the prey, and it will become paralyzed or killed. Once the prey is not struggling any more, it becomes food. The tentacles will move the food up to the mouth, and it will become eaten. The food will now be in the digestive cavity that serves as an esophagus, stomach, and intestine. Jellies have a very simple digestive system. They do not have a liver, gallbladder, pancreas, and intestines. Instead, the food is broken down by digestive enzymes from inside the cavity. Any food that is not consumed is considered waste, and it is expelled out of the same hole that it came in.

How Do Box Jellyfish Eat?

Box jellyfish are super cool because they will actually travel to certain places like a mangrove bed to hunt fish. And when we say hunt, we mean they actually go fishing for dinner. National Geographic actually tagged a box jellyfish with a tracker. The jelly immediately swam in the direction of mangrove trees in the shallow part of the beach. Not only that, it swam fast and with intent. It was not mindlessly floating with the current. We are talking about an animal with no brain or no central nervous system, and it is swimming to a location where fish are plentiful for it to hunt. That is amazing!

A Box jellyfish will actually travel to a location to hunt for food, and once there, it will dangle its tentacles like bait for the fish. Once lured into the trap, the box jellyfish will paralyze the fish and consume it.

Because of the fact that they are opportunistic feeders, these guys will eat most anything that comes in the path of their tentacles. Of course, size matter here as well as location. You really are not going to see a jellyfish on the surface swim down 30 feet because it spots a crab. However, if there is one floating near the shore line and a small crab gets stuck in its tentacles, it will get eaten. There are even some species of jellies that will eat each other! That’s pretty gross. One example is the Lion’s Mane Jellyfish which will eat other jellyfish.