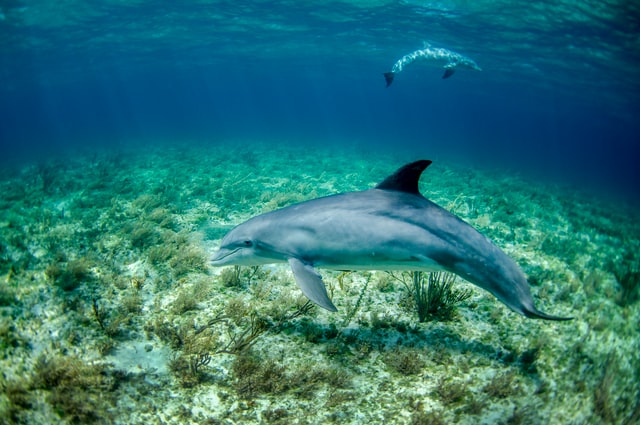 When it comes to understanding bottlenose dolphin adaptations, it is important to understand what adaptations are. A simple definition is the physical or behavioral characteristicsm of an animal which allows it to thrive and survive in its environment.

Marine mammals like dolphins have a wide variety of these. Below is a comprehensive guide of bottlenose dolphin adaptations.

Dolphins have adapted many aspects of their swimming style. One way they do this is called “porpoising” which is when they come out of the top of the water and immediately dive back in. This movement allows them to conserve energy while swimming. If you have ever been out in the ocean around dolphins, you have likely seen them do this while swimming. This method of swimming uses less energy than swimming under the surface of the water.

Dolphins also have a very smooth shape, and the shape of their blubber allows for more effecient swimming. There are many adaptations that allow dolphins to swim very fast.

Dolphins have special physiological adaptations which allow them to conserve oxygen while diving. It is important that they do this because an average dive can last around 10 minutes, and 12 minutes is an average max dive time for a bottlenose dolphin.

When it comes to deep diving for humans, we must watch out for something called “the bends” which is also known as decrompression sickness. This is caused by rapid changes in pressure which can cause gas bubbles to form in the bloodstream. An example of this would be if you are scuba diving, and you come to the surface to quickly.

Dolphins swim rapidly in the ocean, and they will go from deep depths to shallow depths quickly. But, why don’t they get decompression sickness? Dolphins have adapted to their environment, and they have collapsible lungs. They can collapse their lungs when they are diving deep in the ocean, and they can increase their size when they are swimming up. This helps with bouyancy. The bouyant force is decreased when they collapse their lungs.

If you think about a ziploc bag that is filled up with air, it will be more difficult to pull it down under water than if it were empty. This is another example of an adaptation by bottlenose dolphins.

Bottlenose dolphins have a specific way of hunting food. They do it by group hunting or cooperative hunting. One dolphin in a group will drive a group of small fish into a wall or semi-circle of other dolphins. The fish will then jump out of the water, and the dolphins will enclose the fish. This allows them to easily grab jumping fish with their mouths for feeding. Bottlenose dolphins will also splash their tail flukes once they get a school of fish in a circle. This causes the school of fish to bunch together tightly, and this method of hunting is called pinwheeling.

Bottlenose dolphins use echolocation to do several things including communication, hunting, and navigating in their marine environment. This helps them do a lot in the ocean. Another way to think of this is like a sonar system for dolphins. In the simplest terms, this adaptation helps them “see” under the water. Marine scientists do not fully understand the echolocation that dolphins use, but they have theorized that the dolphin will send clicks out from its nasal sac. It has a bump on its forehead, and this bump may be able to amplify the sound. It may also help to point the noise in a single direction.

Other scientists believe that the click comes from the dolphin’s larynx. Either way, the sound travels from the bottlenose dolphin, until it reaches the object, and then the echo will return to the dolphin. This sound will be received in their lower jaw. They will use a series of sound clicks to help determine what and how far away the object is.

Another bottlenose dolphin adaptation is their circulatory system. Their circulatory system will adjust depending on the situation to either dissipate heat or conserve it. Some heat that comes from the blood traveling throught the arteries will be transferred to the venous blood supply instead of the environment. This allows the dolphin to conserve heat. In certain parts of the dolphin like the flippers and dorsal fin, the arteries are surrounding by veins. So instead of the heat dissipating into the environment, the heat is transferred from the arteries to the veins.

Dolphins also have a lot of blubber which helps to improve body heat. Blubber is different from body fat, and it is more fibrous. Most of a dolphin’s body fat is in the form of blubber which allows them to conserve more heat due to the insulation that they receive from it. The body fat of a bottlenose dolphin is usually around 18% to 20% of its body weight.

Another adaptation for bottlenose dolphins is the way they breathe. Dolphins have a very effecient method of breathing, and it is far more efficient than humans. Dolphins are marine mammals so they hold their breathe while under water, and they need to come to the surface to breathe.

When a dolphin comes to the surface, they will quickly inhale and exhale. During this time, they can exchange 80% or more of the air in their lungs. Comparing that to humans who only exchange about 15%, that is way more efficient.

Dolphins have adpated to a unique way of sleeping. They do not sleep like humans do. When people are asleep, they are not aware of their surroundings, but their body with automatically keep breathing. This also happens when a person becomes unconscious.

A bottlenose dolphin does not breathe automatically. Dolphins have to consciously control their breathing. If they were to fall asleep completely, they would stop breathing. Dolphins have adapted to use hemispheric sleep. This means only half of their brain goes to sleep at a time. This allows them to have enough brain function to sleep and to stay alert for danger.

Dolphins will spend about 30% of each day sleeping.

How Do Bottlenose Adaptations Help It Survive

Bottlenose adaptations help it survive in many ways. They help it conserve energy in multiple ways including during hunting, sleeping, and swimming. Any time that something is easier for a dolphin to do, then it can help to increase its survival rate. For example, without food and nutrients, a dolphin would not survive. Adapting their hunting style has made this sometimes arduous task a lot easier. Food is easier to obtain, and they spend less energy doing it. Group hunting is more efficient than solo chasing a small active fish around in the water.

Another way that survival is increased is the adaptation for unihemispheric sleep. If a bottlenose dolphin can stay alert but still rest half of it brain, then it is taking care of two things at once.