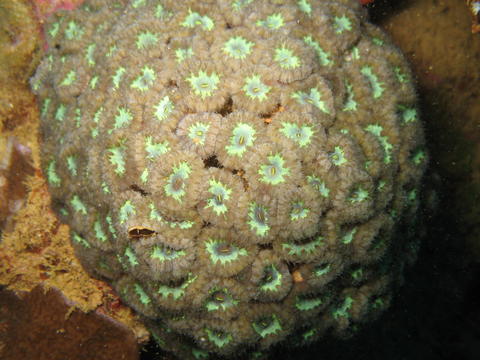 The Blastomussa coral, which is sometimes called Pineapple coral, is a fantastic LPS (large polyp stony) for your reef tank. Because it has big fleshy polyps it can sometimes be confused with brain corals. When their polyps are open, then can sometimes be confused with mushroom anemone. Their beautiful colors and textures will add some pop to your coral reef collection in your aquarium.

These corals work great in beginner tanks or where there is modest lighting. A lot of new reefers don’t go crazy on expensive equipment like reef lighting so this makes it a great choice for newbies. A blasto does not need a set of expensive lights, and they do great in low to medium lit aquariums. They will often do better in underlit areas, and we have seen some become more colorful when moved from brightly lit areas.

In the hobby, these used to be difficult to obtain because they grow in turbid waters in the ocean. Over the years they have become more common because they are fairly easy to frag. Of course, the more rare and unique colors are harder to come by, and they cost a bit more.

This is the most common blasto, and it is favored the most due to the variety of bright colors that it has. They can come in multiple colors including purple, pink, red, yellow, and green. These colors can be combined as well which make for fascinating varieties. In the wild, they do not come in these unique colors, but due to aquaculturing, more colors have become available.

These are hardy corals, and they do well in an aquarium with stable parameters. They do not require a lot of light, and low flow is sufficient for them.

The blasto merletti is often called the Pineapple Coral. It has polyps that reach about 1 inche (2.5 cm), but when they are bunched together it looks like a mass of polyps. These require a little more light than the wellsi, and they will grow under LED’s, T5’s or halides. These are usually harder to find, and are more costly than the blasto wellsi.

Blastomussa corals should be placed in your aquarium where there is low flow and low to medium lighting. They are likely to do better in a spot with lower light than one with too much light. They are fairly hardy, and this placement will ensure the best outcome for healthy blasto corals.

When choosing a spot for them in your tank, you should also consider giving them room to grow. While they are peaceful, they will still need space to grow so that other corals do not grow near them which can sting.

We have seen these thrive and do great in one spot, and when moved to an area with less lighting, they became fuller and grew faster. It was almost like the lighting was hindering its growth and extension.

You should look for an area of your aquarium that has around a 50 PAR, and they can be put there. These LPS corals will turn brown, or they will bleach out if they are put in an area with too much light.

Blasto corals prefer low to moderate indirect flow, and they will thrive in these conditions.

Should I Feed My Blasto Corals

It is not necessary to feed blastomussa corals because they get most of their energy from photosynthetic, symbiotic zooxanthellae that is hosted in their body. You can feed them something like reef roids or mysis shrimp, and they should grow faster. These corals are not difficult to grow, and they do not require too much work. As long as you can put them in a good spot with indirect flow and low light, they will grow well with spot feeding several times a week. They are not rapid growers so don’t expect a large colony from a small frag any time soon.

While these corals are beginner friendly and easy to care for, like most corals, if your parameters are not correct, there can be some struggles with any corals. As always with any saltwater aquarium troubleshooting, you should check your water parameters first. This inlcudes temperature and salinity first. These readings need to be stable as well. You also need to check the usuals including Ph, nitrates, nitrites, ammonia, phosphate, magnesium, calcium, Kh, alkalinity.

If you find your blastos are shrinking and not fully opening up after you put them in your tank, you may have put them in a spot with too much light. Usually, these corals will do better with less light than more light. It can take several days to a week for them to adjust after being exposed to heavy lighting. Of course, you will need to relocate your frag to an area in your tank with lower lighting. It may take a while for your blasto to adjust after the exposure, so give it some time.

You do not want to keep moving your frag every few days because you don’t see it do well initially. Move it to a low light area of your aquarium with some indirect flow and give it some time.

Hopefully you treated your coral frag before you placed it in your tank to get rid of any potential pests. Either way, pests will get into your tank at some, and you will need to identify the common ones to have a successful reef tank. The best way is to learn about common pests and check your tank for them.

Aptasia are common, and you may have one in your colony that is stinging your blastomussas.

Blastomussa corals are great additions to any saltwater tank whether you are a beginner or experienced. While they are LPS corals, they are still easy to maintain and fairly hardy which is why we have them listed as a great beginner coral.